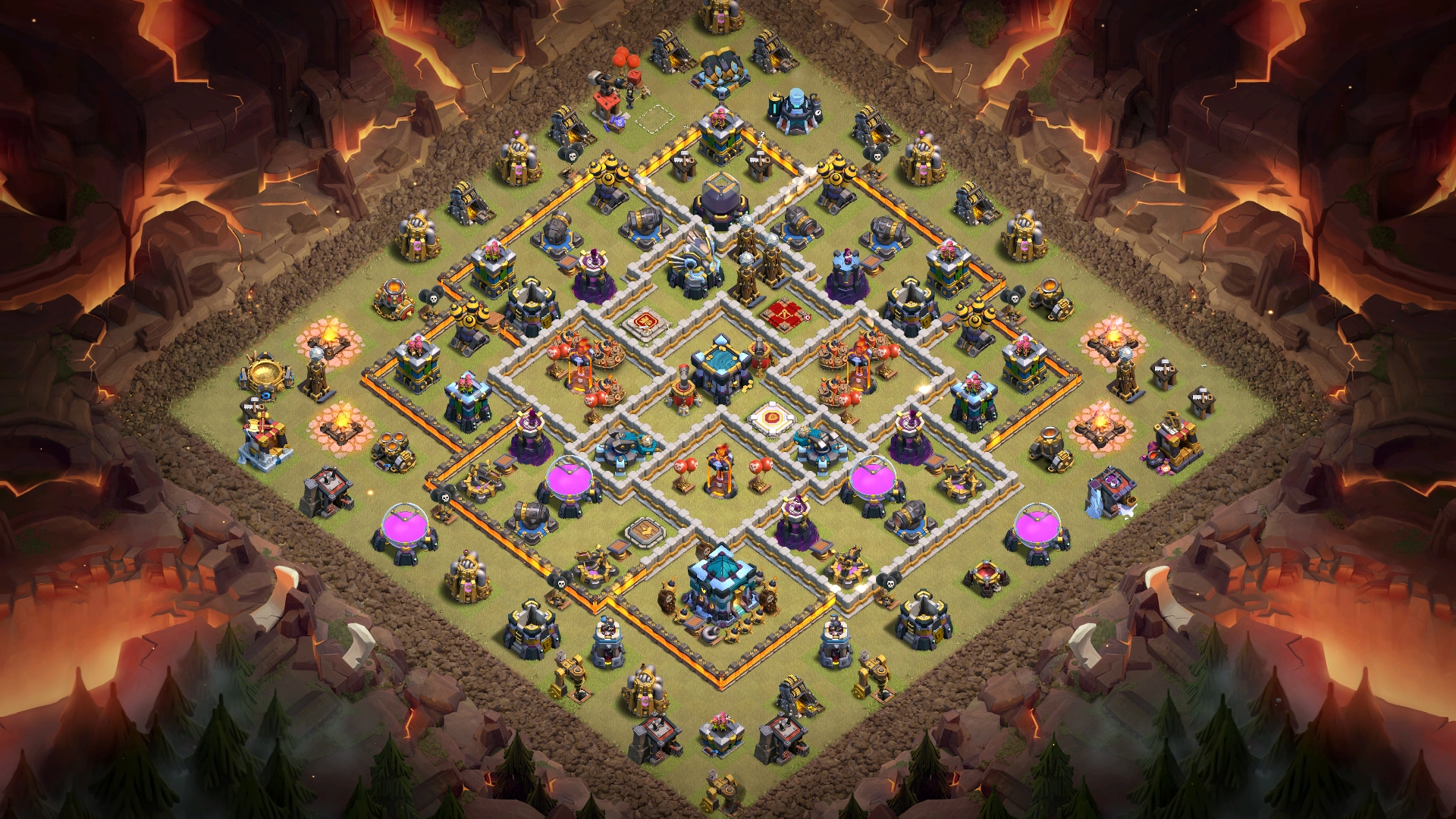 We are going to make the New Townhall 13 war base layout. In clan-war, we have to prevent the opponent from getting 3 stars from our base. so, we have to design the base in such a way that it could defend from any attack strategy. Since clan castle troops help a lot in winning defenses, so clan castle is placed in the center of the base; so that the opponent cannot lure clan castle troops at the beginning of the attack, which will help in ruining the opponent’s attack strategy. Since the town hall is an important building too, so we have to place it somewhere, where the opponent cannot reach it easily. So In this base, we placed the town hall in the inner compartment of the base, along with 1 Inferno tower. Also, Eagle artillery is placed in the different inner compartments of the base, along with tesla farm, which will make it hard for opponents to get, either of these buildings at once. And all the heroes are placed near the main defensive buildings and town hall. so they can distract opponent’s troops that reach near to the town hall, and main defensive structures, which will buy a few times to eliminate those troops. And, 2 X-bows which are placed near to the town hall is set on a ground target. so it can deal damage against QueenWalk early. And other 2 inferno towers are placed in the side compartments of the base, which are set on a single-target. so it can defense those areas against ice golem and other tanking troops. And it also provides backup to air defense during an air attack. And, other remaining X-bows are placed near eagle artillery and set on both air and ground targets. And both Scattershots are placed around the eagle artillery, so it can provide both air and ground coverage for eagle artillery. And all the Wizard towers and bomb towers are placed in such a way that it could provide splash damage almost all over the base. Since the core part of the base is heavily guarded with main defenses like Inferno tower, X-bow, Scattershot, and Giga tesla, so all the air defenses are placed in the outer compartment of the base. so it can deal heavy damage on those areas too. And these Air defenses are placed far from the air sweeper. so that the lightning spell cannot get both at the same time. And, all cannons & archer towers are placed on the edge of the base; so it can cover those areas against air and ground troops. since storage buildings have more hit points than other buildings. so it is placed in front of the defensive structures; which will give extra time to eliminate the opponent’s troops. And, most of the buildings are placed 1 or 2 tiles far from each other. so the opponent’s troops can’t destroy multiple buildings at once. And Some defensive structures are placed outside the base, which will make it hard for the opponent on the funneling process.

If you want to see the speeds build of the base layout, you can watch the video I’ve uploaded on my YouTube channel. You can watch it here, just click on the button below:-

Thanks, guys for visiting this site. If you want to copy this base layout to your game just click on the “Copy Base” button.